Background: The carpus is a complicated and functionally challenged mechanical system, advancements in the understanding of which have been compromised by the recognition that there is no standard carpal mechanical system and no typical wrist. This paper covers components of a larger project that seeks to develop a kinetic model of wrist mechanics to allow reverse analysis of the specific biomechanical controls or rules of a specific patient’s carpus. Those rules, unique to each patient, could be used to create a forward synthesis mathematical model to reproduce the individual’s anatomical motion in a virtual environment.

Objective and Methods: Based on the previous observations, the carpus essentially moves with only two degrees of freedom-pitch (flexion/extension) and yaw (radial deviation/ulnar deviation)-while largely preventing roll (pronation/supination). The objective of this paper is, therefore, to present the background and justification to support the rules-based motion (RBM) concept, which states that the motion of a mechanical system, such as the wrist, is the net interplay of four rules: morphology, constraint, interaction, and load. The stable central column theory (SCCT) of wrist mechanics applies the concept of RBM to the carpus, and by using a reverse engineering computational analysis model, a consistent pattern of isometric constraints was identified, creating a “two-gear four-bar” linkage. This study assessed the motion of the carpus using a 3D (three-dimensional) dynamic visualization model. The hypothesis was that the pattern and direction of motion of the proximal row and the distal row with respect to the immediately cephalad carpal bones or radius would be similar in all directions of wrist motion. To identify the unique motion segments, 3D models were created from five normal wrists that underwent CT scanning in multiple positions of radial and ulnar deviation as well as flexion and extension. Each carpal row (proximal and distal) was animated in a virtual environment with the cephalad carpal bones or radius held immobile. The rotational axis and position of each bone and each row were then compared in sagittal (flexion-extension) and coronal (radial and ulnar deviation) motion.

Results: The carpus appeared to have only two degrees of freedom, and yet was stable in those arcs with the loads applied proximally in the forearm. The proximal row moved in a singular arc, but with a varying extent during sagittal and coronal motion. The isometric constraints were consistent in both directions. The distal row moved on an axis formed by a pivot joint laterally (between the trapezium and scaphoid) and a saddle joint medially (between hamate and triquetrum). The sagittal and coronal alignment of this axis changed as the proximal row moved. This created a distinct pattern of row motion to achieve the various required positions of wrist function. On wrist radial deviation, the scaphoid (with the proximal row) was flexed and the distal row was extended, whereas, in wrist flexion, the scaphoid flexed (with the proximal row) and so did the distal row. The pattern was reversed in the opposite wrist movements. While the general direction of motion of each row was consistent, the extent was quite variable.

Conclusion: This review supports the SCCT of carpal mechanics and the carpus acting as a twogear four-bar linkage, as well as the concept of RBM as a means to understand the biomechanics of the wrist, and how this is translated into specific functional tasks. More sophisticated 3D modelling will be required to further understand the specifics of carpal motion; however, reverse engineering of the specific rules that define each individual wrist can also be applied to a mathematical model to provide a “what if” test of particular surgical interventions for a variety of wrist injuries. The use of quantitative 3D Computed Tomography Scan (CT) analysis, surgical planning and virtual surgical intervention allows potential surgical solutions to be applied to a computer model of an injured wrist to test the possible outcomes and prognosis of a proposed treatment. 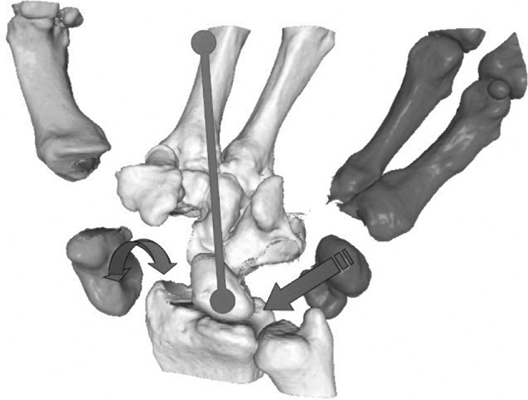