Can Proprioceptive Training Enhance Fatigability and Decrease Progression Rate of Sarcopenia in Seniors? A Novel Approach


Sarcopenia is a common condition in older adults, which causes the frequent occurrence of muscle fatigue. Muscle fatigue commonly develops among seniors. Muscle fatigue is a type of physical fatigue that occurs due to either motor or sensory dysfunctions. Current interventions developed to decrease the occurrence of muscle fatigue, which include either increasing rest periods or subdividing large tasks into small ones. The effectiveness of these interventions is highly contradicted. Recently, researchers discovered that mechanoreceptors are the main receptors of muscle fatigue, however, no clinical study investigated the effect of performing proprioceptive training to enhance the mechanoreceptors and decrease the occurrence of muscle fatigue. Performing proprioceptive training could improve muscle fatigue by improving its sensory part. The function of mechanoreceptors might consequently enhance fatigue and decrease the progression rate of sarcopenia. Thus, this review was conducted to suggest a novel approach of treatment to enhance fatigue and decrease Sarcopenia in seniors. This might be accomplished through increasing the firing rate of α- motor neurons, increasing the amount of Ca2+ ions in the neuromuscular junction, slowing the progression rate of Sarcopenia, and correcting movement deviations, which commonly occur with muscle fatigue in seniors. In conclusion, proprioceptive training could play an effective role in decreasing the progression rate of sarcopenia and enhancing the fatigability among seniors. 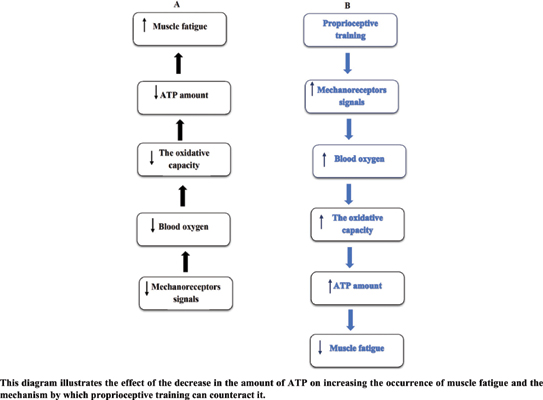